At war with nature 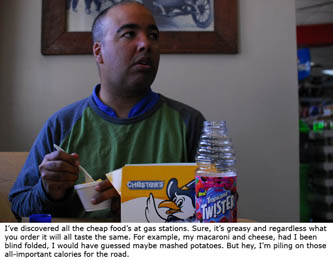 Yesterday was a great day. I took the day off and stayed at the $30 a night motel in Colquitt, Georgia. During the day I went to the bank and got some cash and then went to get lunch (walking, for a change). While having some pizza I asked where in town I could get a sweater and one question led to another and before long the whole restaurant had stopped to listen about my crazy journey. A lady went next door to the town's paper and got a journalist, Wanda, who was immediately interested in my story. She interviewed me and took my picture with the intention of running a story about what I was doing. As an unexpected prize she just happened to have a couple of sweaters and sweat pants which she gave me. Just what the doctor ordered. All in all a wonderful day spent in a very friendly town.

But today was murder. I've personified nature and assumed it or she or whatever is against me. My mortal rival whose success depends on my own failure. Today it has found its best, quit-inducing cocktail of griefs to throw my way by mixing chilly temps, wind and hills. Exercise, I repeat, does not make me warm. It just makes me tired. However, thanks to Wanda the 42 degree morning was not unbearable and the wind is never steady enough to really get to me. Oh but the hills. The hills are killing me. I dread the downhills just as much as the uphills because I know that at the end of the little coaster I'm going to have to pay with another long, tortuous ride up at 3-4mph that makes me wince in pain and effort. Not to mention the loss of the hard-won altitude gain. At one point on Rte. 27 north of Colquitt for about a mile or so there was construction going on and the workers had cleared the land to make room for a new lane. All the trees and grass and garbage were being burned in huge bonfires. The wind, of course, blew all the smoke and ashes straight into my face and if I opened my mouth (and how could I not since I was going *uphill*) I would get nice full breaths of crunchy ash. You'd think that would get me down but inside I thought it was sort of funny in a way how nature had gotten in coming up with creative ways to torment me. What's next damnit? An alpha particle storm?

On those uphills my legs are flush with some kind of aching substance, the Essence of Pain I've called it, which I think is lactic acid. Or it might be that my muscles have torn from their bonely moorings for all I know. The common sense advice would be to stop, rest and let it work itself out. But I can never bring myself to stop on my way up a hill. In fact, today I saw a dime on the road and refused to pick it up because it wasn't worth the effort to restart that piddly three or four mile an hour momentum. I have to be honest and admit that the topography like no other challenge yet is a menace to my completing this journey. If the terrain doesn't flatten out soon my faith in seeing this through will shake.

My bike, too, is ailing. Out of 27 gears only about 6 are useable. The back tire is low and worn and my American-style air pump does not fit the European style valve so it gets worse each day and is probably contributing to my uphill difficulty. I've put out an APB for a bike shop but being in the most rural of areas I'm not too hopeful.

By the end of the day I was welcoming the chance to stay at another cheap motel when the town I rode into, Abbeville, only has a high-buck Best Western. So camping it is. The last time I stayed out in the tent was back in Florida and the next day I realized that I had unknowingly slept not far from a place called the Gator Hole... not exactly inspiring me with a lot of confidence. Not that I needed much of an excuse to pick a motel over the whole camping out thing but I won't go into that spiel again.

I hate to sound so despondent and would rather the tone reflect more optimisim on my part. I have to keep some perspective as well on the issue of hills since this is, after all, a minor test compared to what awaits me out in the Rockies. I am both hopeful that I will go through some flatter terrain and at the same time that my enormous effort will soon pay off in more endurance to tackle these hills. I really, really don't want to quit!