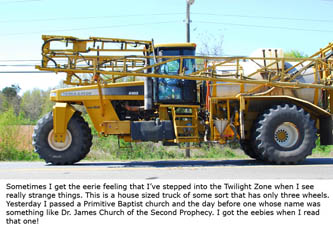 I am taken with some sort of delirium that nature really has it in for me and it's doing its best to get me to change my mind. I'll know for sure when a volcano pops up in the middle of the road. In the meantime I'll just entertain the thought.

Today more of the same chilly wind and hills. Only more intense. But no sir, yours truly is rolling with the punches. I just have to modify my playing game. Alabama I see is all about nonstop hills so my goal of 60 miles a day when I'm in such poor fitness is unreasonable. I am now tmporarily changing that goal to four or five hours of biking per day whatever that ends up being. And hell, if I'm too tired 10 miles up the road I won't be too proud to say enough then either. My second strategy is to stop trying to be Superman about the uphills and get off the bike and walk it up like the wussie I really am. Today, ahem, I walked a lot.

My day had started uneventfully enough when I woke up 6ish and promptly got out of the tent to thumb my nose in the general direction of the Best Western I didn't stay at last night and saving me beaucoup dollars. I ate a danish and drank a little orange juice I had bought at a gas station the day before and I was pumped to do my daily battle with Momma Nature and whatever she had in store for me. Three miles later I pass a handwritten sign that read "Gator Bayou" with a dirt road ominously leading into who knows where. There. Now is SOMEONE trying to tell me I shouldn't tent out anymore, hmm? Who needs to be spooked about the supernatural when the natural can be creepy enough? How entertaining in a Darwin Awards sort of way, I thought, it would have been for the townfolk to read in their newspaper about the stupid tourist who camped out by the alligator farm and made for a tasty though unscheduled meal?

But I had little energy to daydream about the thought because the hills were coming back to back. By 10am, usually the time I'm just getting into the groove of things, I was ready to call it a day and most likely would have had there been a motel nearby. I rode on because I had to. Because not riding would have meant me staying there by the side of the road looking silly. And what I wanted, above all else, was a room and a shower with which to wash the day's skank off. It wasn't until I arrived into Troy, a million miles later and half dead it seemed, that I could slump over the Days Inn counter to ask for a room. Two nights, please. 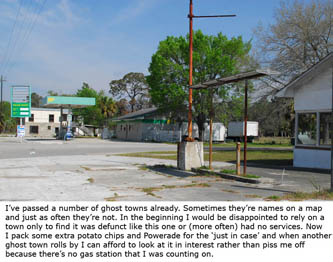