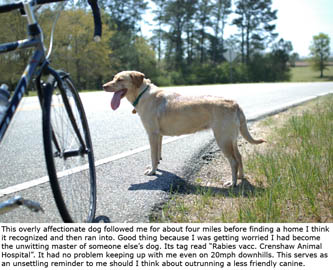 I'm back in the game with high spirits after a little R-n-R. I spent much of Sunday chatting over the internet with friends and family while using my new web cam. Almost like being there! I only left the motel to go get lunch. Chinese was just across the street and I had visions of eating some obscene amount of food to last me all day long. No buffet and the faded order-by-photo overhead sign showed about sixteen identical dishes. I ordered something off the menu and dug in but before even finishing half of it I knew this was probably one of the top ten worst lunches I ever had in my life. I might as well have had them dispense with the euphemism of calling it sweet and sour pork. "Just give me a pint of flavored grease, please." And we would have been done with it. Ah, but who cares, it's my day off and I'm not going to let some bad Chinese ruin it.

By late in the afternoon there was a mutiny throughout my digestive system for what I had sent down the hatch. I braced for diarrhea on an epic scale, an intestinal Gotterdammerung that I would have remembered the rest of my life and told the grandkids about. It kept me waiting til bedtime but in the end never came. Somehow my stomach forgave this grave insult and in return I promised to be more diligent about where and what I dined.

That was my day off. I woke up just after six today (Monday) with the intention of going to the bike store to get my poor bike overhauled. I had made a rare foray into a city and come to Troy for the express purpose of taking care of the mechanical problems. But on finding the address I was disappointed to learn the shop had closed down some time before. My bike, I think, started weeping. With no bike shops along the rest of my route within Alabama I'm taking a big risk that it will hold up. If not.... oh boy let us NOT consider that scenario.

I left heading west on route 10 and eager to meet some hills. My day off was all I needed to face off mother nature on a new round and I was in a fighting mood. The temps had gotten a bit milder and the winds were calm. The hills though took little time in showing up. On the first sizeable one I stopped some ways off the base, gritted my teeth and looked at it with a "let's see what you've got!" attitude. Normally on approach of a hill I tuck my head in; an intuitively driven impulse that I interpret as a psychological self-defense mechanism to not let the work ahead defeat me prematurely. But not today. I looked at that summit and it was going to be all showdown. Me versus the hill. Inanimate vs. Animate.

My victory was to set the tone for the rest of the day and so I rode pleasantly for the next few hours happy that I had overcome the first major hill of the day and the following dozen. Actually, even the hills really were gentler the more west I rode. And that's a great sign!

As most every other day, my mind whiles away the time spent biking either playing songs of its own choosing (I'm not too successful in consciously arranging the playlist) or thinking. Today the cynic in me decided to question why we have such biologically pointless body functions as post nasal drip. I couldn't for the life of me figure out how having a runny nose due to the cold was protecting my insides in some way. For another example I couldn't come to grips with the apparently illogical thermostat mechanism within that has me simultaneously shivering and sweating under my windbreaker. From this I went on to other biology subjects and eventually came up with a lucid line of thinking that had me develop a new Law of Nature that posits that the more complex an organism is the faster it evolves.

Stop me when I'm getting a little too far off track, okay? Sorry about that.... On nearing Greenville I spotted a suitably remote church with a cemetery yard with an eye towards tenting. I briefly considered the etiquette implications of resting alongside those whose repose is permanent and decided against the idea. Or maybe I should be more of a grown up and admit that the whole idea weirds me out. Hey, I grew up watching too many Tales From The Crypt and I'd rather not have zombie dreams when I'm supposed to be resting well for a big exercise spree the next morning. Right? And so with that summary - talk about guilty pleasures - I checked in to another motel when I reached Greenville. 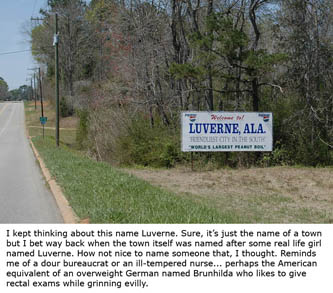