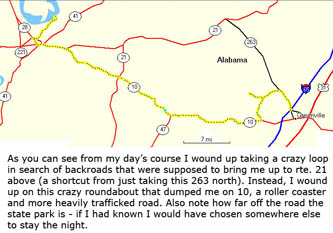 I've mentioned already how my mind likes to play deejay and gets stuck on certain songs often having little to do with the type of music I normally listen to. I can force myself to think of a different tune but as soon as I consciously let go whatever song I had gotten stuck on gets back into the rut. I mention this again because today's ride featured a truly odd pair. On the one hand I had Beethoven's fifth piano concerto playing in my head (just the second movement) and for once I thought its lilting melody well suited to the pastoral scenes rolling by. But then the second is just too weird. It was, get this, the theme song to the Flintstones! And the two disparate music pieces kept taking turns. Yabba Dabba Do!

Anyway, my night at the Greenville Days Inn left me energized for the new day. The temps have finally bounced back to where you'd expect a spring in the south to be and the winds have died down. The hills, unfortunately, are still there and draining the life out of me but I'm past the worst and headed towards the fabled flats of the plains states.

The most newsworthy event of the day would have to be me running into a bit of a route selection fiasco. After deliberating for a long time which way I would go so as to make for the most efficient route towards Camden, my tentative 50 mile away destination, I chose some backroads that were on the map but not signed as such on the road. Inevitably, I ended up getting lost and had to fetch out the laptop to have the GPS get me back on track. By the time I got to Camden I had put on 62 miles thereby wasting what for me is a considerable 12 mile stretch. Worse, the route I ended up having to take was hilly and was the one some petulant dick chose to ride on as well. In his semi he drove past me so close that the turbulence almost threw me off the bike. Reflexively, my middle finger felt the sudden need to stretch to attention; appropriating for itself an autonomy I had not granted. But nevermind, I was able to get it under control just in time to spare the world an unnecesary obscene gesture.

I made one final mistake by taking a gamble on a state park just outside of Camden to camp and save a few dollars. This "just outside" ended up being five miles of very steep downhills. Which means tomorrow morning I'm going to have to ride them back up as soon as I get going. To me tackling hills, monster hills no less, early in the day is kind of like losing your queen early in a chess game. I have absolutely zero compunction about asking a guy with a pickup if he can drop me and all my stuff back out on the main road but I doubt I'll be so lucky. Let's wait for day 18's entry to see what happens.