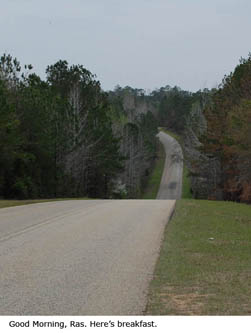 I spent the night huddled in my tent listening to the racket of wildlife outside. This was not the ordinary, almost pleasant noises of insects, frogs and other small animals. I was treated instead to the bellowing of some large animal that I spent much of my waking time trying to guess what it might have been. It sounded like a cross between a King Kong sized donkey and a lawn mower. I half expected at any moment for some mutant, atavistic Thing from the pleistocene to come plodding over and flatten the tent - if not actually taking the time to snack on its contents.

I woke up not surprisingly rather tired and lazy at the prospect of biking two huge hills. And they turned out not to disappoint in spanking me right, left and center. By the time I navigated out of the park (after getting lost on a couple of wrong turns) I had clocked nine miles just to get to the entrance and the whole affair had pretty much knocked out the biking spirit for the day before I covered so much as an inch of new ground.

By 10 in the morning I was finally on the road out of the Camden area. The hills had not let up but at least there were now stretches of flat terrain between each new one and they were no longer so steep as in the last few days. The weather was finally also cooperating. One might say a perfect biking day with highs around 70 and relatively little opposing wind. But, like I said, I had had enough with the rough morning start and didn't feel like pushing myself too hard.

I passed a number of very small towns most of which had no services. That made it difficult to find anything to eat and I was running very low on fluids to rehydrate but in the end help came just in time when I reached a gas station in Thomaston, some 40 miles after I had started. Speaking of small towns reminds me of an observation I've made regarding the demographics of the American south. It seems that towns in these regions may have up to, I dunno, seven churches without there being any actual homes with which to supply them with congregants. This has mystified me a great deal. The cynic in me has concluded that perhaps this is some kind of IRS-cheating conspiracy scheme. Or perhaps the churches themselves double as homes. I'm still trying to sort all this out.

I made it to Linden and felt guilty about stopping for the day at just 3pm and only 50 miles when another 16 could have gotten me as far as Demopolis but I felt exhausted and not in the mood to bike until close to dark. I did say I was going to take it easy in this hill-ridden state, didn't I? I get the feeling Alabama must look like a giant egg carton from space. 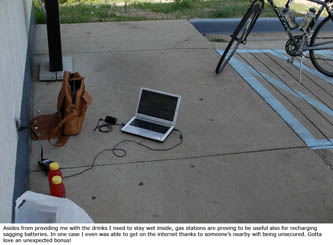