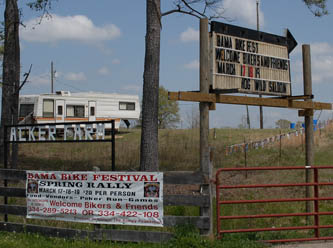 Alabama is finally cutting me some slack on the topography and while it won't give me anything close to a hill-free day at least it has smoothed out considerably and I have now enjoyed some runs of several miles each on relatively flat terrain. As a bonus at one point I even rode on a shoulder! I couldn't believe it. Although it was gravelly and in sections marred with grooves running perpendicular to the road it was a welcome change. I have by now fully resigned to riding on the shoulder-less backroads comfy in the belief that if I should get run over I'll never know what hit me. Hmmmm... pleasant thought.

I spent much of the day putting up with loose dogs harrassing me and contemplating the litter off to the sides. About the former I can only say Alabama has far too many. When one runs up to give me grief I instantly miss my BB gun from my teens and quickly fantasize about it getting run over by oncoming traffic before it has a chance to get too close. In some cases the dogs will bark and chase you indigninantly even when you're riding on the opposite sidewalk, evidently wanting to dispute the notion that that particular section is for public transit.

About garbage I can say that I'm surprised we're such a litter happy nation. I was brought up considering the act of throwing trash anywhere outside of a trash bin as some kind of abomination that only delinquents would do. But I can't change the world and since I have hours and hours of riding alongside it I might as well make my peace with it. I tally it, try to find distribution and type patterns from it, try to make sense out of it. Out of nothing but boredom and familiarity I think I've become a think tank on the subject. I've seen, among countless other things, homemade CD's. The next one I come by, I've promised myself, I will pick up and see what's on it. Maybe it'll be something naughty (if I'm lucky) or just country music (if I'm not) but either way it might be entertaining. I also think about all those plastic bottles I spot with a yellow liquid inside and wonder whether that could really be what I'm thinking it is. But most noteworthy so far has been the analysis of fast food packaging. If I start seeing the wrappers and cups of one particular chain coming up consistently it's an educated guess that the next town will have one of those restaurants. With this in mind I can plan ahead whether I want to eat there or not and gives me a general idea of how big the town might be. This is all a bit fuzzy and not quite scientific but it's served me well a couple of times so far.

I'm heading tomorrow to another city in search of a bike shop as my whole rig is in marginal shape and I worry about its road worthiness. I'm tenting again to save cash, this time behind a gas station from which I actually asked beforehand if it would be ok. I hear time and again from other cyclists that asking for a spot to sleep is rarely turned down. Personally though I've turned out a little shy when it comes to asking strangers about this kind of thing. If I have to tent at all I'd rather no one even knew I was there. 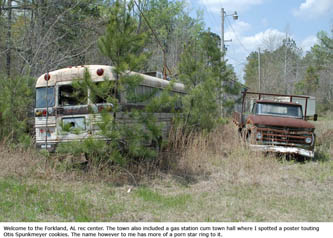