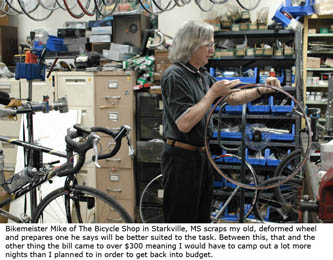 Just to make doubly sure that I'd be waited on first I was at the shop half an hour before opening time, munching on a breakfast of orange juice and Cheezits outside the door.

The bike turned out to be in very sorry shape. I had broken half a dozen spokes on my rear wheel so that in addition to it being bent the tire was also worn leaving the only practical remedy the replacement of the entire wheel. Mike the store owner suggested I go with a wider tire as well for more durability and the heavy duty use I was putting it through. The front derailleur was broken so that had to be replaced as well. Add to the bill new tires for the trailer a jersey and socks and the total was over $300 which put a big, big hurt on the budget but I knew it had to be done. After leaving the shop I spent the rest of the day chatting on the internet with friends and family and treated myself to a Chinese buffet dinner at night. I thought I had sworn off Chinese after the fiasco in Troy but luckily this time it proved to be edible -- if not much past that mark.

Sunday morning I took to the road psyched about having a fully functional bike since early in the trip. There was a stiff wind coming straight from my 12 o'clock and, occasionally, somewhat more leniently from my 9. After the generous shoulder on 82 vanished abruptly I took the first exit and started heading north on the backroads. I felt that at least the change from going straight into the wind was a decent enough tradeoff for the loss of the shoulder. But no, the wind promptly redirected itself to continue our face to face conversation. All I wanted to do was shake my fist at the heavens for doing this to me. Fortunately, the winds did die down after a while. At some point later on I was starting to go on route 50 paralleling 82 when some friendly locals told me to take the Natchez Trace Parkway instead because 50 was in very sorry shape. Even though it was going northeast while I needed to be heading northwest it was sage advice. I got on with the intention of riding only until the next junction north. However, this parkway is so painstakingly manicured and with the gentlest of grades that the ride was very relaxing. It's such beautiful country that it practically inspired me to sing the Star Spangled Banner out loud for the birds and crickets. I ended up riding twelve miles until I knew staying on would put me seriously out of my way. On getting off the parkway it was back to the same ugly road with mounds of unsightly garbage to the sides along with the traffic and all the noisome irritations which have by now become so unwelcomely familiar. 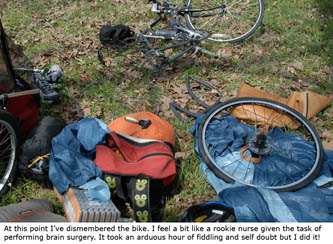 On mile 36 for the day, while still on the Natchez, I got my first flat. It was, surprise surprise, the fancy schmancy new tire that I got only yesterday and was supposed to be the cat's meow when it came to puncture resistance. The irony huh? In any case, I had quite a bit of angst anticipating this moment because I had never had to fix a flat before. With care, trepidation and a whole slew of other emotions I undid the rear wheel and then the tire and tube. I found the tiny hole in the tube but could not find anything coming through the tire wall itself. It took a full hour and some minutes to finish but at the end when I got back on the road I kept stopping every half mile or so to pinch the tire in disbelief that I actually managed the job competently. I have to admit the whole episode filled me with a sense of handyman can-do pride.

All in all I'm pleased to be back on the road and feel more confidence within that my spirit and my rig can withstand the rest of the course. I may only be achieving 1-2% of the total mileage required for the trip each day but I find myself needing little in the way of motivation each morning to continue. 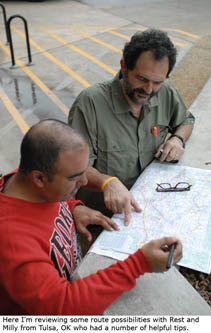