Takes a beatin', keeps on tickin'

I spent the night out in a field on the outskirts of Houston. Not that Houston. Houston, Mississippi, population like 500. The location I had picked to pitch the tent was not the most scenic. It was a rut off the side of the road with lots of puddles infested with mosquitos and ants. I didn't feel like riding into the night so I put the tent up right then and there and fell asleep soon after. It got stormy later on complete with lightning and driving rain but I wasn't much perturbed by any of it. I didn't wake up refreshed but I had saved myself another who knows how many dollars by spending the night in a hotel. Fair enough.

I got going by 8 or so in the morning (no breakfast) and rode busy route 8 through a number of towns and then headed up 9 towards Bruce where I intended to have lunch before heading west. I had noticed that the bike felt more sluggish than before the big fix in Starkville but I attributed that to the fatter tires. On the other hand the shifting was still acting up despite the new derailleur. Every time I had the temerity to up or downshift I was being treated to the death rattle show. And then, all of a sudden, about half a mile short of reaching the town the bike's chain snapped with a horrid ripping noise and with it my heart sank. My first thought was that all hell had broken loose down there but thankfully it was "just" the chain. I had bought a chain fixing kit back in Florida just in case this were to happen but I really dreaded the thought of it. And now here I am with this hellatious mess on my hands. It will not be like fixing a flat, I thought. This is going to be much more difficult. So I got down to business and reading the instructions, make that decoding the instructions which were apparently translated from Chinese to Bangladeshi and then back to Chinese before making it into English, I could only get as far as undoing the busted links but could not figure out placing the tiny pin that connects two of these links to repair the chain back into a loop. 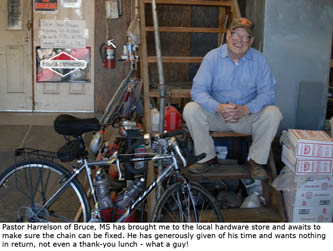 From out of nowhere an elderly gentleman pulls up in his pickup and offers a hand. While working on the chain he begins telling me a little about himself. He turns out to be a pastor who was born and raised in the area. Giving up on the job soon after he offers to take me into town and while there is no bike shop as such there are a couple of handy guys at the hardware store he thought would be able to help. This was a blessing beyond description as I was ready to tear my hair out. So my bike and trailer were hoisted up onto the flatbed of the pickup and I got a my first car ride since leaving Key West. As soon as the hardware store guy saw what the problem was he got a replacement chain and got everything working. The tab came to a measly $7. I offered Pastor Harrelson a lunch or whatever he wanted for having helped me out but he declined each offer saying it was fine. With all told it would be about three hours before I was back on the road but at least I was back on the road. The chain however didn't break for no good reason. There is something wack in the shifting and it needs to be taken care of lest I bust the chain again - or worse. For now, I just ride the gear it's in and if I really, reeeeally need to downshift I either walk the hill instead or, I haven't done this yet, I can always regear the chain manually. This sucks but, again, at least I'm still riding.

Another hard day of work nets me a bit closer to my ultimate destination. While receiving the bad news that the town I had hoped to stay the night in does not have a motel a stranger overheard and kindly offered me a spot on her yard to set my tent. Offer gladly accepted! 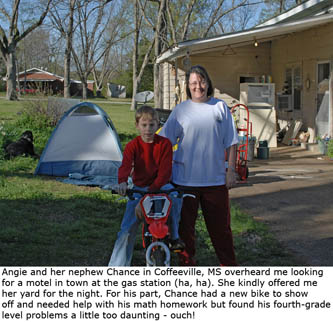